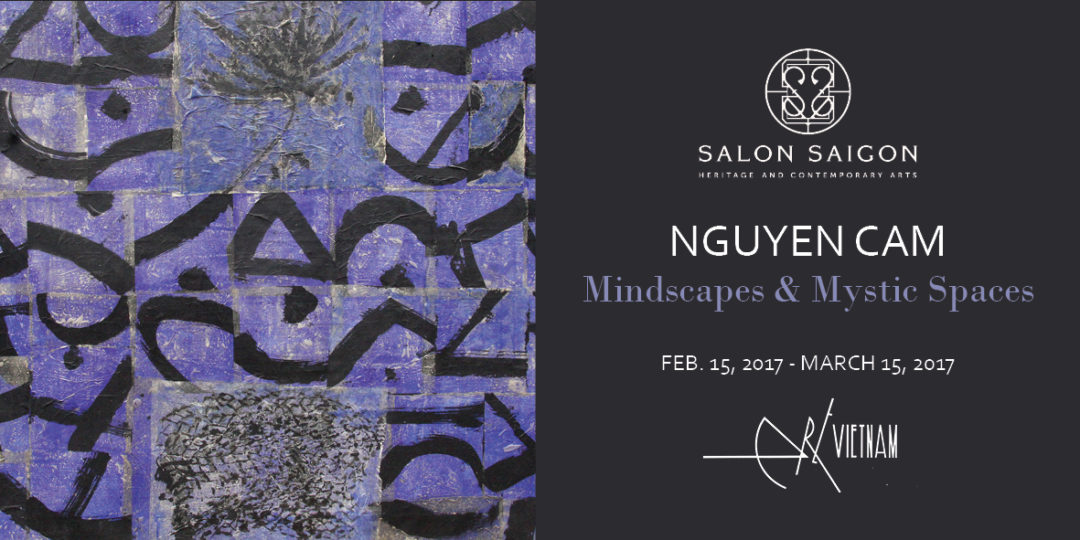 This exhibition marks the 23rd year anniversary of the artist’s poignant return to his country after an absence of 40 years.
Born in Haiphong in 1944 the artist returned to Vietnam for the first time in 1994 after the exodus of his family in 1954. Cam lived in Laos, singularly raising his 5 siblings from the tender age of 17. An autodidact, Cam opened a gallery in Vientiane and had some local repute as an artist of talent and passion. In 1969, fueled with ambition and dreams, Cam moved to  Paris to enroll in the Ecole des Beaux Arts to verify perhaps to himself alone that he was in truth a “real artist”. In 1994, a tribute to Cam as an artist and as a man, the Ho Chi Minh Fine Arts Association invited Cam to come back to his country to exhibit and to teach at the national fine art universities. Reunited with his homeland after a 40 year absence was a powerful, moving experience for the seasoned artist. His memories of Vietnam were those of a child, an innocent trapped in the turmoil of his country within forces beyond his control. Moving through the halls of memory, traces of the past began to appear in his work. Old used rice sacks, votive paper offerings, small patches of silver leaf applied lovingly as one might adorn a Buddhist sculpture, began to emerge. Fragments of the past and a reverence for the present appeared as adornments marking his reconciliation with his history and with his heart. A freedom hard won emerged, walls collapsed and the alluvial soil ebbed and flowed as the wellspring of his hopes and joys were finally released from the stricture of time.

The first works became a progression of free canvas tarpaulins covered with torn rice sacks; slashes of injury held together by a thread of hope, dangling ropes of tenuous connection emphasizing a man struggling to mend the fractures of his soul. Slowly the works evolved into more peaceful ruminations of his past and the life surrounding him, a reconciliation with memory. More joyous works started to appear depicting rays of light and hope, a flow of energy renewed and a feeling of calm and peace began to prevail.  A sense of the wonder of the world, our small place in it and the transient nature of life now springs forth onto the canvases as the artist eases into the autumn years of his life.

For the last 20 years Cam has been coming to Vietnam to paint, exhibit and to visit with friends and family, restoring ties to his homeland and memory. His current works show a man at peace in the world with a renewed energy to express the majesty of life with all its joys and sorrows.

Mindscapes & Mystic Spaces 2017 reflects the journey of the man and the heart of the artist.
The works progress from random, broad calligraphic brush strokes on free canvas to a more tempered, restrained energy. Music of Infinity 2008 is a work that expresses the artists love of music as his calligraphic marks on the Do paper ebb and flow to the strains of the Bach cello concertos the artist himself often plays. The marks are placed on the canvas as one might compose the notes of a musical score. Small gingko leaves adorn the right side of the canvas, a poetic reference to the infinite nature of life and of the gingko tree itself, the oldest tree in nature and a symbol of the power of regeneration. Pacific Ocean, 2005, The Ocean, 2005 and Seaweed II, 2005 are all compositions of Cam’s signature calligraphy enhanced by the marks of nature, creating mystical spaces in the mind.

Calligraphic Fields 2, 2006, Calligraphic Signs and Earth 3, 2006 and Space and Earth 1 and 2, 2006 evoke a tenuous mingling of the past with the torn and tattered rice sacks, emblematic of the ravages of time, merging with the hopeful calligraphic markings of  the present time passing, fleeting from moment to moment. The artist has made peace with his past and is continuing on his journey physically and metaphorically.

Eternity, 2009 is a vision to the future, honoring the past while embracing the present. A hopeful work that resonates with beauty and the eternal spirit, the artist uses a free canvas, signaling no boundaries to life, the gingko leaves a symbol of the eternal and the ochre horizon which leads one to a hopeful future.

His more recent paintings, Imprints 2, 5 and 8, 2011 are joyous works full of wonder and life, a freer brushstroke with random markings. Beginning of Winter, 2012, and Winter Solstice, 2013 present a life reconciled, a sense of structure and peace prevail. The artist and man has returned to himself and is at one with the world.

Nguyen Cam has exhibited widely internationally. His work has been shown in Spain, Brussels, the United States, France, Belgium, Hong Kong, Japan, and Germany and is part of many personal and public collections world wide.

Art Vietnam Gallery presented the Nguyen Cam 20 year Retrospective, Imprints of Origin in 2014 and we are delighted to present with Salon Saigon the return of the artist to the site of his first exhibition in his home country.

Please come to join us in this joyous celebration of return.

Your ticket for the: “Mindscapes & Mystic Spaces” by Nguyen Cam